Black Cats and Halloween: The Myths, the Facts, the Dangers 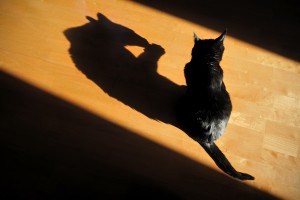 At some point in time, the image of a black cat, hackles raised and eyes glowing, has become intimately associated with the Halloween holiday. They certainly add an aura of mystique to the season, but why black cats? Read on to learn more about how black cats and Halloween have come to be associated and separate the facts from the spooky speculation.

The History of Black Cats and Halloween

The connection between black cats and Halloween is certainly not a new one. Stories of black cats, thought to be evil spirits, being sacrificed into fires during the celebration of the Lord of the Dead on October 31 can be found about 2,000 years back in Druid circles.

In the Middle Ages, it was a commonly held belief that witches could disguise themselves as black cats and these dark felines became associated with witchcraft. In fact, many witches in Europe were burned at the stake alongside their cat.

As with any story that has such a long and colored past, many superstitions and myths about black cats still linger today. Some of the more commonly heard black cat warnings include:

Black cats in truth are far from bad luck and evil. They are loving family friends, just like any other cat.

The Realities and Dangers of Being a Black Cat

Black Dog Syndrome refers to a pattern that many shelter workers and adoption volunteers have noticed over the years. Adopting black dogs and cats into new homes, no matter the time of year, is very difficult.

No one is sure exactly why black colored pets are not as easily adopted to new families as other pets. Some theories include:

While stories of black cats being sacrificed and otherwise tortured around Halloween abound, there is no substantial evidence that animal abuse is any greater then as opposed to any other time of the year. Many people, however, do acquire black kitties for the holiday as festive accessories. Many animal shelters choose not to adopt black cats out around Halloween time to prevent irresponsible pet owners from taking one home.

This Halloween, keep your cats safe by keeping them indoors. While abduction by a Satanic worshiper is probably not likely, busy streets and increased traffic can make for a scary and dangerous place for a cat. During trick-or-treating keep your cats locked up as well, lest they slip out the door. Halloween is a scary holiday for pets and people alike!

Black cats are just a wonderful and sweet as any other cat. If you are lucky enough to own one of these fantastic felines, surely you would attest to that. Next time you are considering adding a furry family member to your home, don’t forget the dark colored ones. A black cat might be just the thing you need after all.

About the Author: Billings Animal Family